The Power of Imagination: Part 2 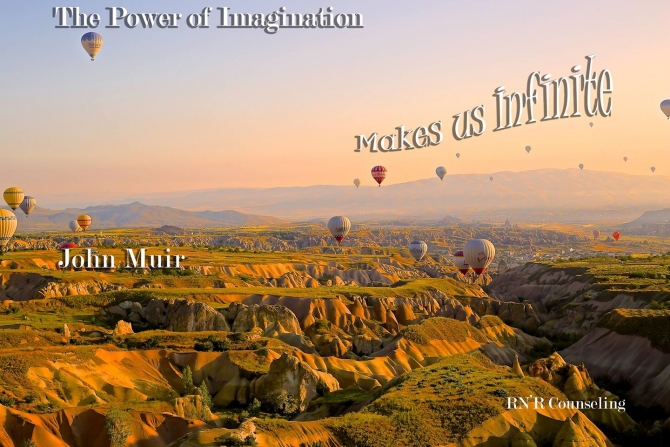 THE DIFFERENCES BETWEEN IMAGINATION AND FANTASY

The dictionary defines fantasy as imagination that is extravagant and unrestrained, a mental image that is unreal and fantastic.

When fantasizing we create unrealistic images and scenarios in our minds that are not possible to bring about in real life.

In fantasy we can make anything and everything happen, it does not need to be based on reality/truth. In our fantasy we are usually the star of the show. As we create these fantastical images, we begin to believe them to be true and we try very hard to get other people to act according to our fantasies - turns out to be a waste of energy.

Let’s use marriage as an example: let’s say that the husband has these expectations (fantasy) of what a marriage should look like. He thinks that as the husband he has the right to relax at the end of the day and have his wife look after his needs. He happens to have a wife who is willing to do it for the most part, so in his fantasy world all is well in the marriage. They have a great marriage. After all he is kind to his wife and buys her things. He is a nice guy. He sees no problems. His wife on the other hand is feeling taken for granted and is not appreciating the gifts or the ‘niceness’ of her husband who does whatever he wants to do whenever he wants to do them. Never taking into consideration

her needs and desires. He simply assumes that she is happy. When she starts to express to him how unhappy she is, he then has to try and control the situation by buying her more things and by being ‘nicer’ to her or failing that, he might get cranky or outright angry with her and try to get her back into line so that he can continue with his fantasy of having a happy marriage.

Now, if this same man were to use his imagination, he would string together a number of facts and come up with some questions, answers and solutions - his wife is saying she is unhappy, what makes her unhappy? She is saying that all the ‘nice’ things he does are not making her happy, what can he do differently? She says she is unhappy because she never gets what she wants, so he strings together the fact that his needs are always met, but her needs are not; he starts to observe and realizes that he is being very selfish and she has been the awesome wife that he always thought he had, so he will take on more of the responsibilities at home so that she does not need to be so overworked. He works hard at having her not only hear the words ‘I love you’, but also have her experience his love for her in many different ways that are meaningful for her.

This man gave birth to the idea that things may not be the way he perceives them to be and then he can engage his mind to figure out how they really are - the truth - and then discipline his will to make changes in a creative way. That then leads to a productive lifestyle.

Another example could be that we find ourselves in a traumatic experience as a child where we are powerless to do anything about our circumstances. The only escape we can find is to create an alternate reality = fantasy.

This fantasy helps us to escape the reality of the trauma we are experiencing. It is our go-to method of ‘taking a trip without leaving the farm’ as it were. We can escape in our minds. No one can see what we are doing nor can they take it away from us. Our alternative reality starts to grow as we experience trauma after trauma. Then before we know it, we are believing our fantasy is the reality.

So as an adult, whenever you perceive that there might be some conflict or something that reminds you, on a subconscious level, of the trauma from your past, you immediately revert back to your fantasy world in an effort to escape the cruelty of reality. It is a form of numbing your mind so that it does not need to think about what to do next.

This can have devastating effects: on the one hand, you can not see what is coming; you are totally unprepared for the likely outcome, therefore constantly living from one crisis to another and you trust people who are not trustworthy. On the other hand, you cannot solve any problems because your mind power is being used up in creating new dimensions to your fantasy.

When engaging in fantasy you are checking out of life because you are not willing to face reality. That then effects other people in your life who need you to be present and who are feeling neglected, unimportant and insignificant because you are not present.