The Power of Imagination: Part 1 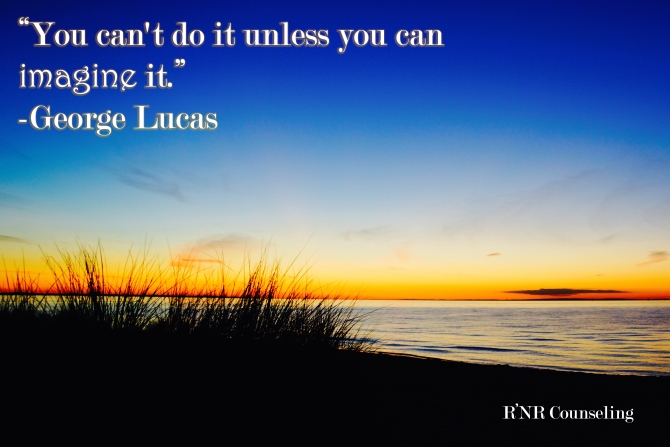 Have you ever imagined what it would be like not to have an imagination? For
me, life would be very dull.

I remember as a child spending hours lying next to my dog, Brownie, searching
the sky for shapes to make up stories about - oh the places I went... Or I would
just stare at the sky thinking about everything or nothing depending on what
mood I was in. Side note: Did you know that looking far into the sky is an
awesome way to relax your eyes?

I remember spending time sitting on the fence with a pretend pipe (I think I got it
from a Cracker Jack box of popcorn) in my mouth pretending I was riding a horse
- I really enjoy riding a horse for real now. Sometimes I was a ‘chauffeur’ of rich
people like the ones in the books I was reading - it has helped me to be a smooth
driver in my adult life. Other times I was a cowboy roping cattle - I have never
yet roped cattle, but I do enjoy being outside, other times I was simply out for a
ride into the blue yonder - I love going on drives now to mull things over. I had
many adventures as a child.

There was a small wooded area between the yard and the cow pasture that
became a world all its own. It could be a field of battle where I could not be
caught and I had to move stealthily from tree to tree or it could be that it was a
peaceful place where I lived and had a school so that I could help people. My
students were well behaved and very eager to learn. I would teach them lessons
from nature as we roamed the woods. We would also have formal lessons where
I would teach them using (get this) the imaginary chalkboard. Or it became my
home where I entertained all my (get this) imaginary friends.

Who can fault a child for having an imagination?

How about as adults? We use imagination all the time too.

Without an imagination we would not be able to dream - day dreams or night
dreams. How dull is that?

Without an imagination we could not solve problems. When faced with a
problem we have to put together a bunch of facts and imagine how to use those
facts to come up with a solution, Then we sometimes also have to use our
imagination to ‘see’ how to make the solution work.

Without an imagination we could not invent things. We have to imagine how
things will look before we ever try to create something new. I have been
dreaming about building a miniature garden. I have taken some steps, but I
quickly realized that I have to do certain steps first before I can create the scene I
have imagined in my mind. There is a logical progression.

The dictionary defines imagination as forming mental images or concepts of
what is not actually present to the senses; producing ideal creations consistent
with reality; ability to face and resolve difficulties; resourcefulness.